Chris Broughton, the man who brought an assault rifle and a handgun to the Obama event in Arizona last week, attended a fiery anti-Obama sermon the day before the event, in which Pastor Steven Anderson said he was going to "pray for Barack Obama to die and go to hell", Anderson confirmed to TPMmuckraker today.

Anderson also said Broughton had informed the pastor about his planned show of arms-bearing, but "he planned out the AR15 thing long before he heard that sermon," delivered Sunday August 16 at the fundamentalist Faithful Word Baptist Church in Tempe, AZ.
his is the second example of the gun-toters at the Arizona Obama event tied to the violent fringes of American life.

"I don't obey Barack Obama. And I'd like Barack Obama to melt like a snail tonight," Anderson said in the sermon.

The sermon, which was titled "Why I Hate Barack Obama" and also contained virulent anti-gay themes, continued:Listen to the full sermon here:
http://tpmmuckraker.talkingpointsmemo.com/2009/08/pastor_of_gun-tot...

Permalink Reply by ZenDog on August 30, 2009 at 7:57am
Life is inherently painful. The problem is that there are too many people deliberately making things worse. It seems inevitable that things will continue in that direction until either the race of humanity ceases to be, or until those who have chosen to deliberately make things worse suffer natural consequences of sufficient breadth and scope that they change of their own free will, or until such time as they simply cease to be found among us.

Permalink Reply by ZenDog on August 30, 2009 at 9:42am
I'll bet if we all put our minds together, we can recall a few more names to add to that long list of rage and injustice . . . 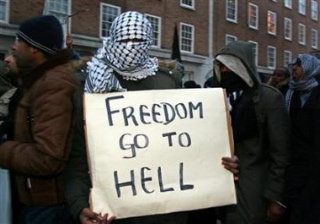 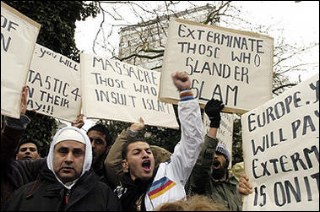 This happened in London. I wonder why the American media hasn't reported it? I know W protected us from these people...will BO?

Permalink Reply by Slayer Dug on August 30, 2009 at 9:44pm
No. Neither will the current Attorney General, Eric Holder. See the sign that reads "EXTERMINATE THOSE WHO SLANDER ISLAM"?!!!!!? Do you think they really care who you voted for?!!!? Make no mistake, the followers of "Radical Islam" make the regimes of Hitler, Stalin and Pol Pot look like schoolyard bullies. They hate everything the West stands for and their "DIRT WORSHIPPING BASTARD CHILD PROPHET" condones their 'convert or be killed' ideology. They hate. They kill. They are more intolerant than any backward-ass redneck you ever met.
Where were the "GUN TOTING REDNECKS" of Europe during these marches?!!!? They were sequestered by the lilly-livered, yellow-bellied liberal apologists in the name of "EQUALITY"!!!

The Jew-hating, American-hating, European-hating muslim thugs of the world have more right to be heard than the NATURALISED, TAX-PAYING CITIZENS of their own countries. Screw them! Shoot them! Kidnap and behead them! All this bullshit whining about the U.S. committing acts of "TORTURE" pails in comparison to...say, the beheading of the innocent journalist Daniel Pearl by the jihadist arm of the ISLAMOFASCISTS!!!
Arm yourselves and soak your bullets in pig's blood.

Although I still have my issues with the 60+ year occupation of Palestine by the "Nation of Israel" and the atrocities they committed against the innocent lives of the Palestinian people along their way to statehood, I firmly believe the world would be better off without their "ethnocentric" war.

Permalink Reply by ZenDog on August 31, 2009 at 4:53am
Ever since the media as an industry consolidated and chose camps we have been subjected to a divisive public debate where the extremes of both ends are "favored talking heads" because the sparks drive revenue.

Permalink Reply by Kittycat on August 31, 2009 at 11:08am
Hi Marjorie, I couldn't bring myself to listen to that sermon. Maybe later. What's this country coming to when people show up in public with guns? Terrible, just terrible. I thought we were past the old West mentality.