I 've been around a while.  Learned to crawl, walk, run.  Ride a bike and roller skate.

I've had my share of boo-boos too.  Never broke a big bone but fractured my nose once and had a fractured rib....results of good fun gone awkward.

I've had stitches here and there from surgery but none  needed from slicing a bagel or chopping veggies...or playing mumblypeg.

So I was thinking...every scar has a story.  Can you recall how you got that one on your knee or the back of your arm...What were you doing?   Where you afraid to tell Mom? 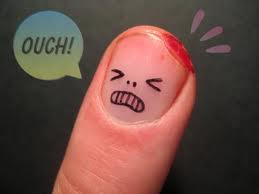 Permalink Reply by Bob Stepp on February 27, 2011 at 5:34pm
"Spoons" can really be ruthless. I have played with forks....just to make it interesting.

Permalink Reply by Quinn on February 27, 2011 at 6:10pm
Who thought drinking and games were a good idea? I spent some time in the ER with a friend who had a quarter stuck down his throat.

Permalink Reply by J Lee S on February 27, 2011 at 5:56pm
Four scars from laser surgery to remove my gall bladder last year. Big scar on my right knee from crashing through a church window. Scar on left thumb from a broken booze bottle. Scar on forehead( a bit Potter like) and a couple on right cheek from windshield meets elk. Scar on left middle finger from a griddle scrapper from work. Internally things are much better...I think.

Permalink Reply by J Lee S on February 28, 2011 at 4:34pm
Hiya Jaylee and Quinn! The church scar was just my cousin Jerry and I rough housing outside of a church in the neighborhood when we were about 11. Nothing scandalous or anything.

Big one on the back of my right ankle where I fell on a broken bottle while wrestling in a muddy ditch. I was 5 at the time. various minor scars, broken teeth and one dead tooth(have had root canal)from fights.

Scars on right hand from showing how tough I was by putting my fist through a window. Scar on lip and chipped tooth from being shot by a BB gun.  Right eyebrow slightly lower than left from being hit with a two by four with a nail sticking out. That also involved a skull fracture, and about  50+ stitches. I learned to not be in the wrong part of town late at night. Well, not really. Pretty good scar on left hip from replacement surgery, long scar on little finger of left hand. Another broken bottle incident. Scar on head from a rock fight when I was 6.

Bones: broken left arm when in 6th grade. Pushed off the top of the slicky slide(does anyone else call them that?). Had to ride 50 miles in the back seat of the car, holding my broken arm on a pillow, to get to the hospital to get it set. Right arm broken racing motorcycle. Right collarbone broken while racing cross country on a dirt bike. That time I had to ride about ten miles on the back of another bike to get to a doctor.  Broken nose, two ribs and brused pancreas from a head on car wreck.

Had polio when I was 15. Starting to have some muscle weakness from that.

Survived many adventures in backwoods of Colorado. A year in the remote mountains of Turkey, A tour in Viet Nam. Rocket attacks, emergency landings, and flying around in helicopters with 20 year old pilots.

I consider all those scars testiment to a life well enjoyed.

I'm surprised Quinn didn't mention getting whacked in the head with a lacross stick?

Permalink Reply by Quinn on February 28, 2011 at 4:51am
I'm surprised Quinn didn't mention getting whacked in the head with a lacross stick?

Permalink Reply by Snagg on February 27, 2011 at 8:34pm
Let's see...Nice little inch long scar bisecting my left middle and ring fingers from when I reached into a sink of soapy water, unaware that there was a broken drinking glass hidden within...


Two dandy scars from high school, when I was doing an underwater hand stand in a friend's in-ground wading pool, and her stupid little brother sloshed up behind me and shoved me in the back, causing both my shins to bark against the cement edge of the pool...Went right to the bone on both of them. Nice.

Two seven-inch plus scars on my right arm, from surgeries to repair a radial nerve severed when I tripped over a throw rug in a dark room and went elbow-first through a plate glass mirror; Small scars on the back of my left leg from where they extracted some nerve to splice in there...

Nice rippling one on the inside of my right calf from where a bicycle pedal scraped me during a crash..

Small notch on top of my left foot from surgery to remove a benign tumor a few years ago...Carpal Tunnel surgery scars on both hands...various scars on my hands and arms from working on a loading dock for thirty-plus years, including two mauled fingers when a machine malfunctioned one day and started up while my hand was in it (For a few hours that day, until the reconstructive surgery, I had six and a half fingers on my left hand) and one where a remarkably tough watch band gouged out a chunk of my left wrist rather than snap when it snagged on a shifting skid of work...