Is it just me or

aren't there a lot of dog attacks lately? I don't mean one bite, I mean maulings. It (here anyway) is usually a pit bull. I myself would never own a pit but WTH...Is it the owners, breeding or just the breed itself?

I have always felt it is both but mainly how the dog is raised ...

Permalink Reply by Karin M Fichtner on July 10, 2013 at 12:54pm
Originally, pit bulls (aka Staffordshire Terrier) were referred to as the "Nanny dog" because they were so good with kids. Then we decided their strength and powerful jaws would make them good fighting dogs, so we bred them to be fighters over a period of time. It's not the dogs' fault. But now I wouldn't trust a pit bull anywhere near me. I watched one murder my little dog and scatter his remains all over my yard. By the time he was done, that white dog was red with my dog's blood. Then my husband arrived, and the dog wouldn't let him out of his vehicle. He had broken his large chain and was dragging it around with him. I can't get that image out of my head. The dog had come for me; my little dog was trying to protect me.
My granddaughter has a pit bull, and I won't be in the same room with him. She locks him up when anyone comes over. He's already bitten my youngest great granddaughter twice, leaving a scar under her right eye. When they moved last week to Ft. Bliss in El Paso, the only way they got to live in base housing was to say their dog is a mixed breed......which, technically, he is; he has some American Bulldog in him. It's a good thing they have a good high fence around their new yard. But I still worry about my older great granddaughter. So far, so good, but I still worry.

i'm sure that most people who own pits would say its how you raise them and to some degree that might be true but i remember readin an article on vicious dog bites about 20 years ago and the most vicious breed as far as vicious bites goes was pit bulls .. and by quite a wide margin .. i think if my memory serves me well (and sometimes it does and sometimes it don't ) pit bulls accounted for more than half of all vicious dog bites .. so that would lead you to believe are all the pit owners or at least half of them bad owners if its only a matter or upbringin ?? i'd have to say probably no .. they are a pretty popular breed tho so that could account for the number bein so high ..but to combine all the breeds and still have the pit bull have more than 50% of all vicious attacks ?/ that does say somethin is goin on ..weather its inbreedin or just bad tempered dogs i don't know as i'm not a dog breeder .. i've owned a few dogs in my life but never a pit bull .. and for this very reason i don't think i'd ever reconsider .. i had a girlfriend who had one and it was a good dog tho so i couldn't condemn the whole breed .. the second highest dog in the ratins for vicious attacks was a chow and i've had 3 chow mixes and they've all been good dogs so maybe its the mix that helps ?? i can't say for sure .. and third on the list believe it or not was a cocker spaniel and i'd never want one of them .. ever .. i don't think i've ever met one that didn't have a nasty temperment .. not that i've met that many but a half a dozen or so is enough for me to form my opinion ..

Permalink Reply by dwalt on July 10, 2013 at 1:33pm
I have pretty much always had schnauzers, they are loyal, smart, and don't really shed. Think I'm sticking with them....

My brother had two pitties, and after just a few minutes with them I was rolling around on the floor with them like they were my own. They were just as sweet and affectionate as any other breed of dog I've encountered, and one of them in particular so adored children that I'm sure he would have given his life to protect even a stranger's child. An old neighbor used to have a Rottie whom he ignored and neglected. Did the dog become mean ? No, he was the most desperately affectionate dog I've ever seen, a gallant and noble beast who wanted more than anything in the world to love someone and be loved back.

Dogs represent both everything good and everything bad about people, not dogs - There are no "bad" breeds, there are simply breeds that have been bred to do different things, and being a lap dog isn't always one of them - And blaming the breed for that is the same as blaming the counter help at McDonald's for not serving filet mignon.

Dogs give us their all, and we have in return warped some of them almost beyond recognition, as it suited our legitimate needs or most base desires. A damaged dog can be mean, sure, but you're more likely to be attacked by a screwed-up human than you are a screwed-up dog - Screwed-up people who, of course, will always expect mercy and compassion for themselves, but cheerfully demand the death penalty for a dog. 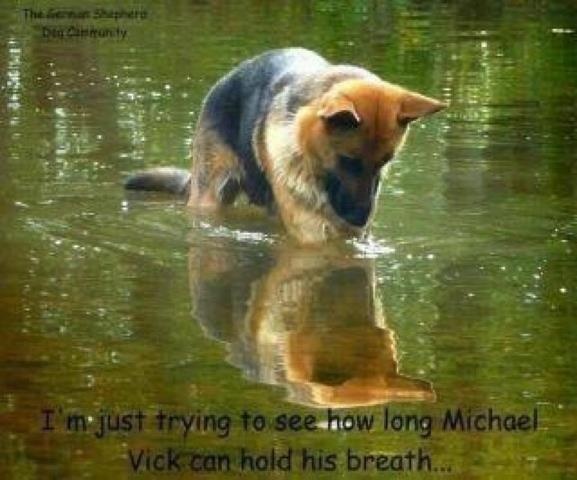 Permalink Reply by Karin M Fichtner on July 10, 2013 at 4:31pm
Amen!
Agree with most of what you've said. The pit that killed my dog was owned by a family across the highway from me. She came over to apologize, and it was clear she was devastated. She kept saying that her dog always played very nicely with her "grand babies"....I don't know how old.....and never displayed any aggressive tendencies before. I told her I would think twice before I'd let that dog near a small child; I'd witnessed first-hand what ferocity it was capable of. They were not made to put the dog down, but the dog was impounded for 10 days, and they were told to erect a dog pen strong enough to keep it confined. I am glad they didn't kill it.

my asshole neighbor promised me my dog would die from rat poison in summer,the 1st day of summer,my dog died from rat poisoning,the asshole vet would not go to court,so I was s.o.l.,for a little while,is all i'm sayin'.that was 3 summers ago.and my asshole neighbor won't or can't look at me.i just remember after it happened,he had a lot of trouble walking for a while,(I don't know what happened to him) R.I.P.Budman. Permalink Reply by Karin M Fichtner on July 11, 2013 at 8:23am
I had one poisoned with Strychnine.....and one paralyzed by my neighbor throwing a huge boulder over the fence and striking my poor Whiskey on her back. God took care of the old man, though; he was using a torch on his lug nuts and set his gas tank on fire.....and him, too. He didn't die......but it might have gone easier on him if he had.

my neighbor sits on his deck all day drinking and chain-smoking,a total waste of life.every once in a while I hafta go over and straighten him out for beating his own dog (he has a beautiful miniature Doberman),he never walks it or plays with it,i don't know why,he has all the time in the world.

Good riddance to both your neighbors. Flipper, why don't you just take yer ratbag neighbor's dog ? Sounds like he won't even miss it. (I would. Hell, I wouldn't be able to stop my fiancee from grabbing that pup, if he was our neighbor.)

I know he's being investigated( idon't know if 'm allowed to say this,) because the piece of garbage is always yelling at his little girl (she's about 7 or 8 y/o),i never saw him hit his daughter,i think i'd lose it if I saw him hurt her.his wife gets loaded and yells at all the neighbors.it was a nice quiet place before they moved in just over 4 years ago.

awwww man chief thats one of the saddest stories i ever heard about a dog .. i think i woulda kept that dog .. i woulda paid the owner for it but i woulda thought that was fate somehow.. i suppose there are exceptions to every rule and that may have just been one of them ..

and i'm sorry to hear about your dog flipper .. i had a sammy that died from bein poisoned .. i never did find out who did it or even why , i have my suspicions tho .. but you can't act on suspicions .. it breaks your heart tho .. i can so relate ..