Method:
In a large bowl, combine yeast, warm milk, sugar and one cup of flour. Cover and let it rise until doubled in size.
Beat together eggs, 1/2 cup of melted butter (reserve 1/4 cup for brushing on the pastry) and salt.
Add egg mixture to yeast mixture and blend.
Stir in about two more cups of flour, 1/2 cup at a time. The dough should be soft and moist.
Knead dough for about 10 minutes on floured surface. Don't worry, it’s a joy to knead as the dough is smooth and highly malleable.
Put dough in a greased bowl and let rise covered until doubled in size—about an hour.
After dough has risen, punch it down and pull off egg-sized pieces. In your hands, roll pieces into balls and then flatten to about three inches in diameter. Brush with melted butter.
Place flattened pieces on a greased cookie sheet, cover and let rise again for another half-hour.
After second rising, with your finger gently make an indention in the center of the dough (be careful not to flatten it too much) and fill with one tablespoon of fruit filling (recipe to follow) and sprinkle with posypka (recipe to follow).
Bake in oven at 375 degrees for 12 to 15 minutes. Brush with melted butter when you take them out of the oven and serve warm.

Kolache filling
Ingredients:
1/2 pound of dried fruit such as apricots or prunes.
Sugar to taste
1/4 teaspoon of cinnamon
Lemon zest

Method:
Soak the dried fruit in water for a few hours or overnight.
When fruit is re-hydrated, cook on low for 15 minutes, adding sugar to taste (I find the fruit sweet enough so I don’t add sugar, but you may prefer it sweeter), cinnamon and lemon zest. Mash with a potato masher until you have a puree.

Method:
Mix all ingredients until crumbly.

This recipe makes about 18 kolaches, depending on how large you make them. And the variations are endless. For additional flavor you can soak the dried fruit in tea such as Earl Grey or you could sprinkle goat cheese on the apricot kolaches before baking. You can also make sausage and jalapeno kolaches by wrapping the three-inch flattened piece of dough around a two-inch piece of sausage and a couple of pickled jalapeno slices.

Have any of my fellow Texas Germans heard of a pastry called "Kuhländler Huxtkichlen" or just "Huxtkichlen" for short?
Huxtkichlen are a special pastry that comes from the Kuhländchen region of northern Moravia and Austrian-Silesia. In the Kuhländchen dialect, Huxtkichle means “kleine Hochzeitskuchen” or “small wedding cake” in English. It is also known as “Kolatschen” in German. However, you probably know it by the Czech name “kolache”.
I was thrilled to find a German recipe for "Kuhländler Huxtkichlen" on the Alte Heimat Kuhländchen web site, because its existence there confirms a long held belief of mine that my German-speaking ancestors knew this pastry in the old country and didn’t just learn it from the Czech immigrants. Most of my German-speaking ancestors immigrated to Texas from the Kuhländchen region in the 1880s. They settled in communities around Schulenburg, Weimar, High Hill, Swiss Alp and Ammannsville where there were large German and Czech populations. We always knew this pastry by the Czech name “kolache”, but it was just as common to be baked in a German-speaking household as a Czech-speaking household.
The German recipe I found is only slightly different from my own kolache recipe. I translated the German recipe into English using American measurements and readily available ingredients so that I could try it out. The main differences are that it called for adding grated lemon peel and raisins to the dough. Another difference is that the cottage cheese filling was folded inside the pastry instead of being on top.
Another traditional filling for the Kuhländchen Huxtkichlen is “powidl”, also known as “Pflaumenschmiere”, which in English literally means "plum smear". This filling is made by taking pitted plums and no other ingredients, and cooking them very slowly at low heat (under the boiling point), stirring occasionally, until all of the liquid is gone. I understand that this can take two or more hours to be done correctly. It can then be sealed in canning jars. I haven't seen this filling before in Texas, but that must be why prunes are a common filling for kolaches in Texas.
Updated with recipe below:
Kuhländchen Huxtkichlen, also know as kolaches:
Ingredients for the yeast dough:
4 cups flour
8 Tbsp. (1 stick) butter
1/3 cup sugar
2 egg yolks (or can substitute 1 egg)
1 package of dry yeast (2 ¼ tsp.)
1 cup (8 oz.) lukewarm milk
pinch of salt
lemon peel (I used 1 Tbsp. fresh)
vanilla sugar (I use 1 tsp. vanilla extract)
1/2 cup water
Cottage Cheese filling:
2 cups (16 ounces) cottage cheese
1/4 cup sugar
2 egg yolks (egg whites make it too wet!)
2 Tbsp Cream of Wheat or all purpose flour to thicken
Cinnamon, vanilla or lemon peel (if desired)
rum raisins (optional – I do not use)
Streusel topping:
1 cup flour
2/3 cup sugar
1 stick (8 Tablespoons) soft butter
Instructions:
Stir the butter with sugar and egg yolk.
Add flour, milk and remaining ingredients and beat well to form a smooth dough.
The dough shouldn't be too firm. It should be sticky! (Note: The original recipe came out too firm when I made it. Since the original recipe did not have water in it, I added ½ cup water to the recipe.)
Let the dough rise well (1 ½ hours – or overnight in the refrigerator).
Pull off portions about the size of a table tennis or golf ball. Dip the dough ball in melted butter and then press onto the baking pan lined with parchment paper. I like to have the raw dough pieces touch slightly in the pan so that they will rise higher.
Use a tablespoon to press an indention into each dough ball. Fill with 1 tablespoon of desired filling, such as cottage cheese, sweetened poppy seeds, sweetened nut mixture or fruit preserves.
Sprinkle Streusel over the Kichlen.

Bake at 375 F for 20 minutes. Adjust temperature and time for your oven. 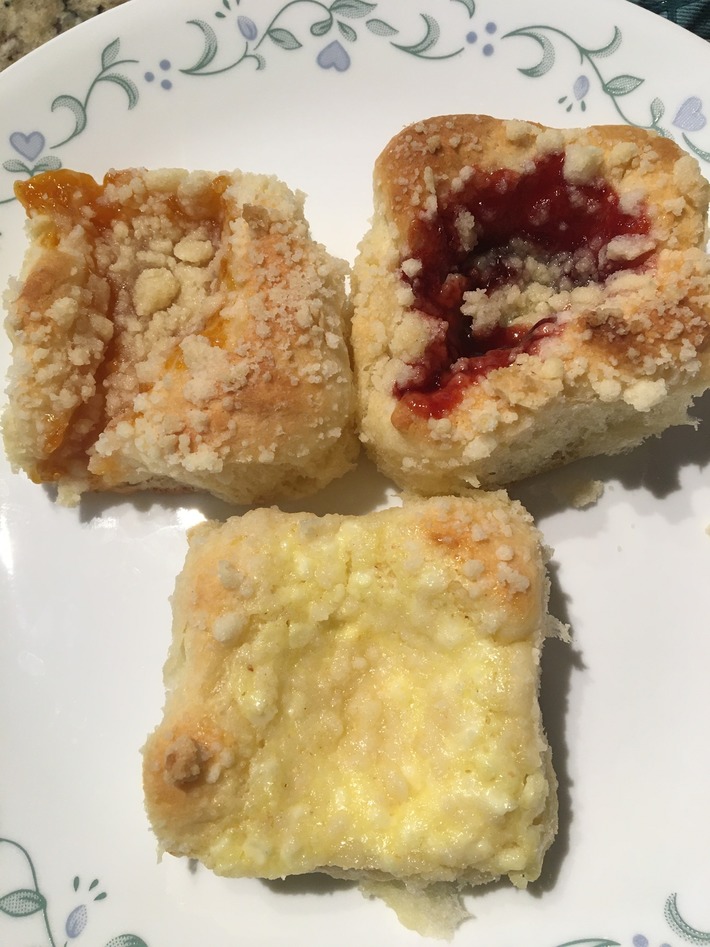