Who Is The Smallest Government Spender Since Eisenhower?

Would You Believe It's Barack Obama?

It’s enough to make even the most ardent Conservative crazy scratch his head in confusion. and "Go figure."

Amidst all the cries of Barack Obama being the most prolific big government spender the nation has ever suffered, Marketwatch is reporting that our president has actually been tighter with a buck than any United States president since Dwight D. Eisenhower.

Check out the chart – 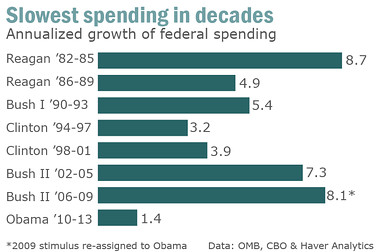 So, how have the Republicans managed to persuade their idiots to buy into the whole “Obama as big spender” narrative?  Just stupid?

Or it might have something to do with the first year of the Obama presidency where the federal budget increased a whopping 17.9% —going from $2.98 trillion to $3.52 trillion. I’ll bet you think that this is the result of the Obama sponsored stimulus plan that is so frequently vilified by the conservatives…but how stupid.

The first year of any incoming president term is saddled—for better or for worse—with the budget set by the president whom immediately precedes the new occupant of the White House. Indeed, not only was the 2009 budget the property of George W. Bush—and passed by the 2008 Congress—it was in effect four months before Barack Obama took the oath of office.

Accordingly, the first budget that can be blamed on our current president began in 2010 with the budgets running through and including including fiscal year 2013 standing as charges on the Obama account, even if a President Willard M. Romney takes over the office on January 20, 2013.

So, how do the actual Obama annual budgets look?

No doubt, baseless2final will wish to give the credit to the efforts of the GOP controlled House of Representatives. That’s fine if that’s what works for you.

However, you don’t get to have it both ways. Credit whom you will, but if you are truly interested in a fair analysis of the Obama years to date—at least when it comes to spending—you’re going to have to acknowledge that under the Obama watch, even President Reagan would have to give our current president a thumbs up when it comes to his record for stretching a dollar.

Let's hear it from the teabaggers here: "Who cares about FACTS ? He's a NIG - a SOCIALIST !"