A man in Denver, CO. decided to write a book about churches around the country. He started by flying to San Francisco, and started working east from there. Going to a very large church, he began taking photographs and making notes. He spotted a golden telephone on the vestibule wall and was intrigued with a sign which read "$10,000 a minute."

Seeking out the pastor he asked ab...out the phone. The pastor answered that this golden phone is, in fact, a direct line to Heaven and if he pays the price he can talk directly to God.
The man thanked the pastor and continued on his way. As he continued to visit churches in Seattle, Austin, Green Bay, Chicago, Milwaukee, and all around the United States, he found more phones, with the same sign, and got the same answer from each pastor..

Finally, he arrived in Texas . Upon entering a church in Fort Worth, Tx., behold, he saw the usual golden telephone. But THIS time, the sign read "Calls: 25 cents. Fascinated, he asked to talk to the pastor.

"Reverend, I have been in cities all across the country and in each church, I have found this golden telephone and have been told it is a direct line to Heaven and that I could talk to God, but, in the other churches the cost was $10,000 a minute. Your sign reads 25 cents a call. Why?"

The pastor, smiling, replied, "Son, you're in Texas now. This is God's country...it's a local call." 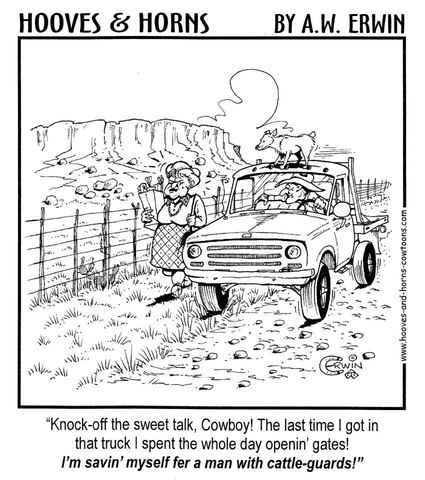 Are you saving yourself for a man with cattle guards?

ADVICE FOR ANYONE MOVING TO TEXAS.
1. Save all manner of bacon grease. You will be instructed later how to use it.
2. Just because you can drive on snow and ice does not mean we can. Just stay home the two days of the year it snows.
3. If you do run your car into a ditch, don't panic. Four men in the cab of a four wheel drive with a 12-pack of beer and a tow chain will be along shortly. Don't try to help them. Just stay out of their way. This is what they live for.
4. Don't be surprised to find movie rentals & bait in the same store.
5. Remember: "Y'all" is singular. "All y'all" is plural. "All y'all's" is plural possessive.
6. Get used to hearing "You ain't from around here, are ya?"
7. If you are yelling at the person driving 15 mph in a 55 mph zone, directly in the middle of the road, remember, many folks learned to drive on a model of vehicle known as John Deere, and this is the proper speed and lane position for that vehicle.
8. If you hear a redneck say, "Hey, y'all, watch this!" Stay out of his way, these are likely his last words ever.
9. Get used to the phrase "It's not the heat, it's the humidity". And the collateral phrase "You call this hot? Wait'll August."
10. There are no good delis. Don't ask.
11. In conversation, never put your hand on a man's shoulder when making a point, especially in a bar.
12. Hot dog chili does NOT have beans in it.
13. Brisket is not 'cooked' in an oven.
14. Don't tell us how you did it up there. Nobody cares.
15. If you think it's too hot, don't worry. It'll cool down-in December.
16. We do TOO have 4 Seasons: December, January, February, and Summer.
17. A Mercedes-Benz is not a status symbol, a Chevy, Dodge, or Ford truck is.
18. If someone tells you "Don't worry, those peppers aren't hot" you can be certain they are.
19. If you fail to heed my warning in #18 above, be sure to have a glass of milk and some bread handy. Water won't do it.
20. Rocky Mountain oysters are NOT oysters. Don't ask. DON'T GOOGLE IT EITHER! It's worse than regular oysters!
21. If someone says they're "fixin" to do something, that doesn't mean anything's broken.
22. Don't even think of ordering a strawberry daiquiri. What you really mean to say is 'Margarita.'
23. If you don't understand our passion for college and high school FOOTBALL ??just keep your mouth shut.
24. The value of a parking space is not determined by the distance to the door, but the availability of shade.
25. If you see a slower moving vehicle on a two lane road pull onto the shoulder that is called "courtesy".
26. BBQ is a food group. It does NOT mean grilling burgers and hot dogs outdoors.
27. No matter what you've seen on TV, line dancing is not a popular weekend pastime.
28. "Tea" = Sweet Iced Tea. There is no other kind.
29. Everything is better with Ranch dressing.
30. DO NOT honk your horn at us to be obnoxious, we will sit there until we die!
31. We pull over and stop for emergency vehicles to pass.
32. We pull over for funeral processions, turn our music off and men remove hats or caps. Some people put their hand over their heart.
33. Most of us own at least one gun.
34. "Bless your Heart" is a nice way of saying you're an idiot.

Advice from An Old Farmer
Your fences need to be horse-high, pig-tight and bull-strong.
Keep skunks and bankers at a distance.
Life is simpler when you plow around the stump.
A bumble bee is considerably faster than a John Deere tractor.
Words that soak into your ears are whispered… not yelled.
Meanness don’t jes’ happen overnight.
Forgive your enemies; it messes up their heads.
Do not corner something that you know is meaner than you.
It don’t take a very big person to carry a grudge.
You cannot unsay a cruel word.
Every path has a few puddles.
When you wallow with pigs, expect to get dirty.
The best sermons are lived, not preached.
Most of the stuff people worry about ain’t never gonna happen anyway.
Don’t judge folks by their relatives.
Remember that silence is sometimes the best answer.
Live a good, honorable life… Then when you get older and think back, you’ll enjoy it a second time.
Don ‘t interfere with somethin’ that ain’t bothering you none.
Timing has a lot to do with the outcome of a Rain dance.
If you find yourself in a hole, the first thing to do is stop diggin’.
Sometimes you get, and sometimes you get got.
The biggest troublemaker you’ll probably ever have to deal with, watches you from the mirror every mornin’.
Always drink upstream from the herd.
Good judgment comes from experience, and a lotta that comes from bad judgment.
Lettin’ the cat outta the bag is a whole lot easier than puttin’ it back in.
If you get to thinkin’ you’re a person of some influence, try orderin’ somebody else’s dog around..
Live simply. Love generously. Care deeply. Speak kindly. Leave the rest to God.
Don’t pick a fight with an old man. If he is too old to fight, he’ll just kill you.
Most times, it just gets down to common sense.

"PASSING THE BUCK / THE BUCK STOPS HERE"
Most men in the early west carried a jack knife made by the Buck knife company. When playing poker it was common to place one of these Buck knives in front of the dealer so that everyone knew who he was. When it was time for a new dealer the deck of cards and the knife were given to the new dealer. If this person didn't want to deal he would "pass the buck" to the next player. If that player accepted then "the buck stopped there".

Only in Texas!!! You will not believe what happened this morning. So I pulled into the gas station to get some gas, and a Gatorade. As I was walking in the store, I noticed a Police Officer parked on the side of the building. He was watching this woman who was smoking a cigarette while pumping her gas. Of course I saw her, and thought, what a dumb a**!!!
Anyways, I went inside and got a Gatorade and as the cashier was giving me my change, I heard somebody screaming. I looked out the window, and saw that the woman's arm was on fire....... She was swinging her arm, and running around like a crazy lady. I ran outside to help but the police officer had just put the lady on the ground, and was putting the fire out with his coffee.He then handcuffed her, and put her in the back of his car.
I thought to myself, "What kind of person smokes while pumping gas?!?! Did she really think nothing was going to happen?!?!
So being the inquisitive person that I am, I asked the officer what he was charging her with? He looked me dead in the face, and said, "WAVING A FIREARM!!!!"

“TEXAS HUMOR”
One day, a very gentle Texas lady was driving across a high bridge in Austin As she neared the top of the bridge, she noticed a young man fixin’ to jump. ("fixin to" in Texas means getting ready to).
She stopped her car, rolled down the window and said, "Please don't jump! Think of your dear mother and father." He replied, "My mom and dad are both dead; I'm going to jump." She said, "Well, think of your sweet wife and precious children." He replied, "I'm not married, and I don't have any kids." She said, "Well then, you just remember the Alamo." He replied, ''What's the Alamo?'' She replied, "Well, bless your heart! You just go ahead and jump, you little Yankee Democrat Bastard! You’re holding up traffic.”

It’s just one reason you should never ask a man if he’s from Texas: if he is, he’ll tell you; if he’s not, don’t embarrass him.