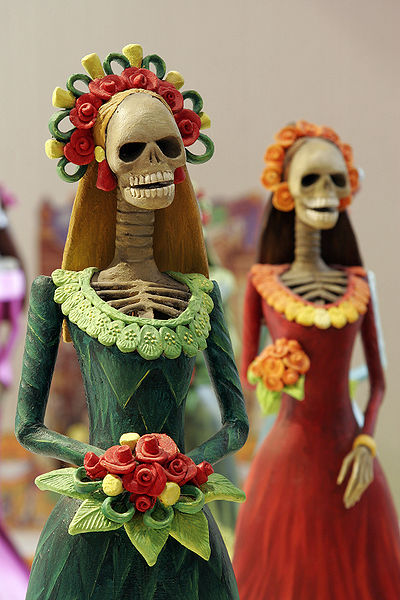 La Calavera Catrina is a 1913 zinc etching by Mexican printmaker José Guadalupe Posada. The image has since become a staple of Mexican imagery, and often is incorporated into artistic manifestations of the Day of the Dead in November, such as altars and calavera costumes. The etching was part of his series of calaveras, which were humorous images of contemporary figures depicted as skeletons, which often were accompanied by a poem.

The word catrina is the feminine form of the word catrín, which means "elegant". The figure, depicted in an ornate hat fashionable at the time, is intended to show that the rich and fashionable, despite their pretensions to importance, are just as susceptible to death as anyone else is.

Permalink Reply by Thomas William Farquhar on October 18, 2009 at 7:21am
Are you familiar with the Hieronymous Bosch painting "The Haywain" which features Death grasping at the straws on a passing haywain. This possibly symbolizes the transient nature of life.

Permalink Reply by Maricel Evasco on October 18, 2009 at 9:57am
Hieronymus Bosch
Hieronymus Bosch, a Netherlandish painter is known for his fantastic, remarkable creatures and visual interpretations of hell, death, sin and folly. He is celebrated as an eccentric painter of religious visions. He was recognized as one of the most clever, most perceptive, most apocalyptic masters of his time. His use of symbolism in his terrifying creations seemed bizarre, distasteful and sometimes even heretical. In the twentieth century, his work has been “rediscovered” as tourists are in awe of his great triptychs of the unusual.

His works are STRANGE....am still trying to figure out the meaning behind some of them:
http://www.morbidoutlook.com/art/articles/1999_00_bosch.html

When the velvety gates of night open wide
Misty spirits will no longer hide
It's wild beasts' howling cacophony
the perfect maddening symphony
.....I want to dance with a phantom tonight.

As clocks strike midnight, let the banshee waltz begin
My skirts will ruffle and rise, along with our bodies that spin
A pale ghoulish,ghostly one,spritely light on his feet,
Shall whisper dark demonic secrets, to my ear soft and sweet
.....I want to dance with a phantom tonight.

The dank cemetery,our ballroom floor,we shall dance on the graves,
His cold corpsey breath,chilling me,washing over me in waves.
But I shall dance on,with nary a whimper nor a cry,
For he is the one dead,and I the one never more alive.
.....I want to dance with a phantom tonight. ~~ ~~L.R.~~ ~~ 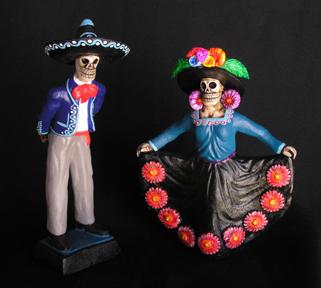 What did you say your profession was again???????

Nope,no professional writer here,just a woman who loves thinking of ways to express herself with words......

Maricel I was a preschool teacher for quite awhile,and now I am assisting students part time at the community college just down the road from me.