Marriage changes passion . . . suddenly you're in bed with a relative. 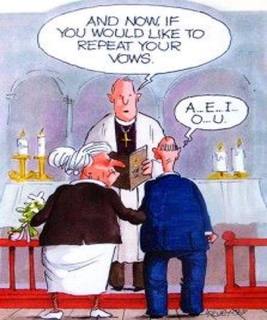 Compliment somebody on their moustache and all of a sudden she is not your friend anymore.

Farm Life
A little boy comes down to breakfast. Since they live on a farm, his mother asks if he had done his chores.
" Not yet, " said the little boy.
His mother tells him no breakfast until he does his chores.
Well, he's a little teed off, so he goes to feed the chickens, and he kicks a chicken. He goes to feed the cows, and he kicks a cow. He goes to feed the pigs, and he kicks a pig. He goes back in for breakfast and his mother gives him a bowl of dry cereal.
" How come I don't get any eggs and bacon ? Why don't I have any milk in my cereal ? " he asks.
" Well, " his mother says, " I saw you kick a chicken, so you don't get any eggs for a week. I saw you kick the pig, so you don't get any bacon for a week either.. I saw you kick the cow so for a week you aren't getting any milk. "
Just then, his father comes down for breakfast and kicks the pussy cat halfway across the kitchen.
The little boy looks up at his mother with a smile, and says,
" You gonna tell him or should I ? " HELL EXPLAINED
>
BY A CHEMISTRY STUDENT
The following is an actual question given on a University of Arizona chemistry mid term , and an actual answer turned in by a student.
The answer by one student was so 'profound' that the professor shared it with colleagues, via the Internet, which is, of course, why we now have the pleasure of enjoying it as well.
Bonus Question: Is Hell exothermic (gives off heat) or endothermic (absorbs heat)?
Most of the students wrote proofs of their beliefs
using Boyle's Law (gas cools when it expands and heats when it is compressed) or some variant.
One student, however, wrote the following:
First, we need to know how the mass of Hell is changing in time. So we need to know the rate at which souls are moving into Hell and the rate at which they are leaving, which is unlikely. I think that we can safely assume that once a soul gets to Hell, it will not leave. Therefore, no souls are leaving. As for how many souls are entering Hell, let's look at the different religions that exist in the world today.
Most of these religions state that if you are not a member of their religion, you will go to Hell. Since there is more than one of these religions and since people do not belong to more than one religion, we can project that all souls go to Hell. With birth and death rates as they are, we can expect the number of souls in Hell to increase exponentially. Now, we look at the rate of change of the volume in Hell because Boyle's Law states that in order for the temperature and pressure in Hell to stay the same, the volume of Hell has to expand proportionately as souls are added.
This gives two possibilities:
1. If Hell is expanding at a slower rate than the rate at which souls enter Hell, then the temperature and pressure in Hell will increase until all Hell breaks loose.
2. If Hell is expanding at a rate faster than the increase of souls in Hell, then the temperature and pressure will drop until Hell freezes over.
So which is it?
If we accept the postulate given to me by Teresa during my Freshman year that, 'It will be a cold day in Hell before I sleep with you,' and take into account the fact that I slept with her last night, then number two must be true, and thus I am sure that Hell is exothermic and has already frozen over.
The corollary of this theory is that since Hell has frozen over, it follows that it is not accepting any more souls and is therefore, extinct.........leaving only Heaven, thereby proving the existence of a divine being which explains why, last night, Teresa kept shouting 'Oh my God.'
THIS STUDENT RECEIVED AN A+.

A man came home from work and found his three children outside, still in their pajamas, playing in the mud, with empty food boxes and wrappers strewn all around the front yard. The door of
his wife’s car was open, as was the front door to the house and there was no sign of the dog.
Proceeding into the entry, he found an even bigger mess. A lamp had been knocked over, and the throw rug was wadded against one wall. In the front room the TV was loudly blaring a cartoon channel, and the family room was strewn with toys and various items of clothing. In the kitchen, dishes filled the sink, breakfast food was spilled on the counter, the fridge door was open wide, dog food was spilled on the floor, a broken glass lay under the table, and a small pile of sand was spread by the back door.
He quickly headed up the stairs, stepping over toys and more piles of clothes, looking for his wife. He was worried she might be ill, or that something serious had happened. He was met with a small trickle of water as it made its way out the bathroom door. As he peered inside he found wet towels, scummy soap and more toys strewn over the floor. Miles of toilet paper lay in a heap and toothpaste had been smeared over the mirror and walls.
As he rushed to the bedroom, he found his wife still curled up in the bed in her pajamas, reading a novel. She looked up at him, smiled, and asked how his day went. He looked at her bewildered and asked, ‘What happened here today?’
She again smiled and answered, “You know every day when you come home from work and you ask me what in the world I do all day?”
“Yes,” was his incredulous reply.
She answered, “Well, today I didn’t do it." 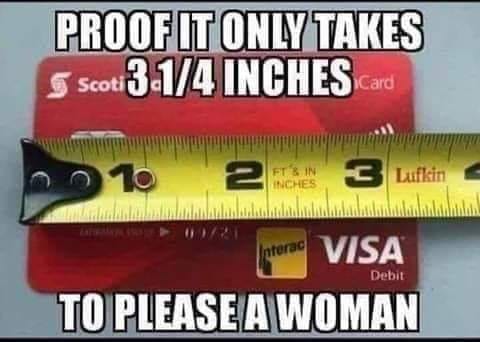 Waiter: How would you like your steak cooked, sir?
Me: Like winning an argument with my girlfriend.
Waiter: Rare it is...

A young lady came home from a date looking rather sad. She told her mother, "Arthur proposed to me an hour ago."
"Then why are you so sad?" her mother asked.
"Because he also told me he was an atheist. Mom, he doesn't even believe there's a hell."
Her mother replied, "Marry him anyway. Between the two of us, we'll show him how wrong he is."

A woman goes to a counselor, worried about her husband's temper.
The counselor asks, "What's the problem?
The woman says, "Every day my husband loses his temper for no reason. It scares me."
The Counselor says, "When it seems your husband is getting angry, take a double shot of Jack Daniel's and swish it in your mouth. Swish and swish, but don't swallow until he either leaves the room or calms down."
Two weeks later, she tells the counselor, "a brilliant idea, Every time I swished the Jack he calmed down. How does swishing Jack Daniel's in your mouth do that?
The counselor said, "The Jack Daniel's does nothing. Keeping your mouth shut is the trick".