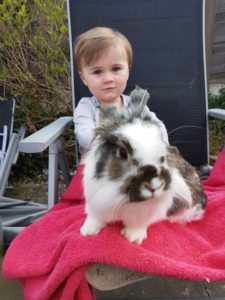 A two-year-old who helps to look after rabbits in Blue Cross foster care has become the charity’s youngest ever volunteer.

Little Amelia Grace and her family care for homeless bunnies in the garden of their home in Radcliffe, Manchester, until the charity finds permanent homes for them to go to.

This two-year-old girl has the 'magic touch' with homeless rabbits
Amelia and Monty. Photo: Blue Cross
Some of the rabbits have been nervous around adults but Amelia’s gentle touch has given them the confidence they needed to find a home of their own.

Amelia’s family first cared for Monty and Sandy followed by Peter and Lily who struggled with human contact and would growl at their adult carers.

However, not long after arriving in their foster home and the care of Amelia, they began to show interest in her and gradually other people. Happily, they have since found a loving home.

“We’ve been amazed at how Amelia has a natural gift with the animals the family has cared for,” said Georgia Holt, Animal Welfare Assistant at Blue Cross. “While some of the rabbits have not wanted much human contact with us, under Amelia’s watch they have positively blossomed into friendly, happy pets.”